I’ve kept quiet recently mostly due to a single reason: I’ve encountered a person at work with whom I find working particularly difficult. I’m uncertain as to how I should phrase the situation. Objectively, his style of interaction and mine don’t match, and 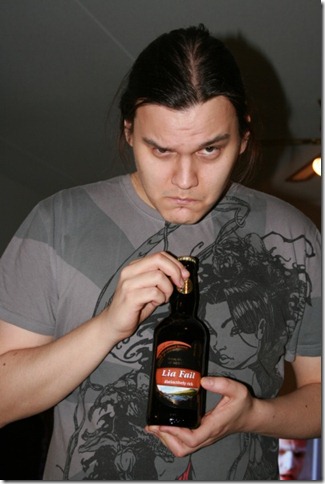 neither one of us is willing to adapt to the other.

Subjectively, he drives me fucking nuts.

I don’t want to cast blame, but I’m inevitably going to, anyway. He comes to ask me a question, interrupts me mid-answer, visibly ignores me when I’m trying to emphasize a point that I feel is essential in understanding what I’m trying to say, zones off, and acts in a seemingly arrogant way. He doesn’t respect me as a developer, regardless of the countless times he’s dropped a problem in my lap and I’ve solved it for him. And rest assured, every time he does something that I find genuinely good, I commend him for it. And if I find that I was wrong and he was right, I admit it. Right away, even.

Now, my style of discussing things may be a bit extreme to some people. I raise my voice when I get frustrated, particularly if I have to explain the same thing FOR THE SIXTH GODDAMN TIME AND YOU’RE IGNORING THE ANSWER AGAIN, AREN’T YOU, AAAARGH STAB STAB STAB.

As I was saying, my style may not suit everybody, and for a while I was willing to accept that the fault might be entirely in me. Intellectual honesty demands me to admit that I might be the cause.

However, having discreetly approached the issue with fellow workers, five people out of five found him exceptionally difficult to work with. So although I’m certainly responsible for my part, maybe, just maybe I’m not entirely wrong in pointing a finger in his direction.

A bit of Great Success, too.

This friction (which hadn’t quite escalated this far at the time) was one of the primary reasons I agreed to a job interview at Sininen Meteoriitti, back in August.

I’ve only been to a couple of interviews during what passes as my career. But there was one distinct difference between this one and the ones I had been to earlier. I decided to bring my personal quirks on the table from the get-go, and I kept an eye on how they reacted to me. In essence, I did what I should have done every time, and interviewed them right back.

In September, I got a call from Meteoriitti. The caller told me they couldn’t hire me yet, but would it be OK if they kept my contact details anyway? Of course, I said, and pushed the idea to the back of my head, feeling a bit disappointed, since in my book “later” means “next decade, if ever.”

Apparently not so for Meteoriitti. Just over a month later I got another call, this time saying it’s a definite “Go” if I’d still be interested. Hell yes I was!

So yeah, I’m switching jobs again, after only a year and a half. But I’d like to emphasize, that while I took the interview mainly because of things I was dissatisfied with at my current job (and felt I was unable to change at the time), I’m taking the job because I really feel that things clicked here.

Let’s see how I can rock the boat there. 🙂