I’m too lazy to finish the travelogue now (and truth be told, even I find it a little boring as a tale instead of the experience), but I think I’ll get around to it later. In the meantime, some interesting bits and pieces.

Well, trying to, anyway. I decided to do my data structures project in C. The single most useful resource so far: How to read C declarations.

As of 0.8, TortoiseHg works with the 64bit Windows Explorer. Yum! I had close to zero success running it using a 32bit Explorer on Windows 7 – the fractional bits of “success” were the times I noticed TortoiseHg overlays in the File Open dialog of a 32bit app… 😛

The mystery of the Two Document Folders

I figured out why I have two sets of “My Documents” (and a bunch of other links I can’t open) in my home directory: 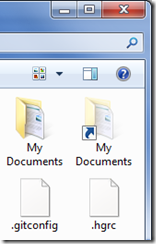 I figured they appeared when I chose to have Explorer display all hidden files and folders. The second “My Documents” is in fact a NTFS junction point that exists no doubt for compatibility reasons. The first “My Documents” folder is really called “Documents”, Explorer just has some magic to translate the name. I wonder what happens to the junction if I switch languages…

… or I need to stop blogging when I’m too tired to think straight. I was trying to change the formatting of a block from “Paragraph” to “Heading 3”, and what I did instead was hit “Publish”. Apologies for RSS subscribers, all um… two of you, I have a sneaking suspicion you may see an earlier version of this post due to said mishap.

That’s it for today.

It’s been a week since we returned from our trip to London, and I thought I’d post a bit on said trip.

Hit Helsinki-Vantaa around 15:00 local time. Dropped our bags at the BA bag drop — which was still handling a flight to Rome, so we had to queue for about twenty minutes before proceeding. Did the security dance and sat down to wait for boarding.

I took my student laptop (an Asus EEE 900) with me, thinking it would be easier to carry that around instead of my own laptop. Besides, were it to get stolen, the cost of replacing it would be much lower. There were some open WLAN hotspots, but none of them had a strong enough signal for me to do anything with, so instead I began a game of Solitaire on my iPod.

Approximately an hour to boarding there was an announcement saying we’d be delayed for 40 minutes due to the plane arriving late from its previous flight. I didn’t think much of it, but a half hour from that, they announced another delay. Eventually we boarded the plane two hours late, and arrived similarly two hours late of the intended schedule.

After departing the plane on the tarmac and having a bus drive us to the airport, then walking through the seemingly endless hallways to the luggage pickup, our bags were already there. I also spotted an ATM and withdrew some local currency. A few minutes later we found our way to the Tube. I bought both of us Oyster cards with a travelcard and some charge for the trip from Heathrow and back.

We took the Tube from Heathrow to Earl’s Court, switched lines there, and found ourselves at Bayswater Station at 22:30 local time. We spotted a Subway, went there to grab a bit to eat, then went on to the hotel, which was a two-minute walk from the station.

The hotel room was comfy, if cramped. Unfortunately, the net connection was not wireless, and I hadn’t brought an ethernet cable with me. When we were settled in, it was getting pretty late already, so we turned on the telly, watched it for a while and then went to sleep.

We got up relatively early, seeing as we were still in the GMT+2 sleep cycle. I had looked up the local map, and knew there was a mall called Whiteleys near the hotel. We hit the mall – almost no stores were yet open. There was a Starbucks though, so we went there for breakfast. I have to say I’m disappointed with the Starbucks latte. 🙂

After breakfast we did a quick tour of the Books, etc. store at Whiteleys (I bought “The War of the Flowers” by Tad Williams, entertaining read and refreshingly, not a trilogy). Back to the hotel for a bit, and next up was Camden Town.

I didn’t really know what to expect from Camden Town, but it would definitely have exceeded whatever expectations I might have had. The Tube exit was to the side of Camden that was filled with street merchants, little clothing shops, veggie restaurants and whatnot – the entrance was on the other side, which we immediately labeled “the boring side of Camden”.

We walked from street merchant to store and back in the maze-like alleys of the Stables Market for hours. There seemed to be no end to new things to see. And to buy, of course. The experience was pretty overwhelming, being used to living in small suburbs. My feet were beginning to scream – the walking shoes I was wearing weren’t really intended for the cobblestone streets of the Stables Market.

Upon our return from Camden Town, I picked up an ethernet cable at an electronics store to get online at the hotel. With that sorted, I was able to get the netbook online and report in to people back in Finland. It was also useful for looking up Tube routes, and for the online check-in due for our way back on Sunday.

I intended for this post to be only moderately long, and to publish it today. In order to do that, I’m going to have to cut off here. Apparently it’s not possible to write anything meaningful about a week’s worth of events in only a few paragraphs. Who knew. 🙂

So my vacation has just begun. I’ve only got three weeks this year, because I switched jobs about a quarter of a year into the period that determines the yearly vacation time. I didn’t negotiate more paid vacation time when I took this new job, either. My mistake, but there you go.

We’re kicking my vacation off with a trip to London tomorrow. We’ll be there for a week. Our current plans include some of the mandatory sights, but mostly I just want to wander around a bit, sit in cafés, browse books at book stores and get to know the local culture a bit.

In the meantime, three of our friends are touring the Europe together on the InterRail. With any luck, they’ll manage a detour to London for a day or two so we can hit the town together, and see what sort of mayhem we can come up with. 🙂

In other news, I’m futzing a bit with Windows Live Photo Gallery – I think it really needs a publishing plug-in that creates a zip archive from the selected images. This will most likely end up being Yet Another Project I Won’t Finish, but still, it’s enough to keep me interested.

Another developer-y thing I’ve been looking at is the XNA framework. It’s really fun, even if all I’ve managed so far is to draw a couple of lines here and there. I’m considering starting a small game project with a friend of mine.

This about wraps it up for today. Rytmis out.