A week of Windows 7

I’ve been playing with Windows 7 Beta for just under a week now. Initially I thought I’d install it in a virtual machine, but I never seemed to have enough space on my laptop. I also had an issue with my Vista install – a lockup that forced me to do a hard reset also broke a file or two that were integral to the functioning of Windows Update. Imagine my surprise when I figured I hadn’t had any updates in over a month. I tried various voodoo-esque methods to fix things, but as each of them failed to provide results, I began to consider using a beta version more and more.

The installer seemed nice for starters, almost on par with modern Linux installers. 😉 However, one thing that caused hours of frustration was that since I had PowerShell installed, the upgrade refused to run. And Vista refused to show me any way to uninstall PowerShell. After some searching I found a registry setting which fooled the installer to thinking I didn’t have PS, and things began to work.

Well, by “work” I mean the installer agreed to run. It took hours to “gather” my files (why it needed to know that, I have no idea – every file I care about is in the exact same spot it was in before the upgrade). In the morning I peeked at the progress. It told me “21%” and “Windows needs to reboot”, but gave me no way to agree to the reboot. A forced restart later, the installer booted up, only to fail at resuming. I figured this was due to the forced restart, booted back into Vista (luckily the installer left Vista untouched at that point) and fired the installer again. This time at 21% I got a reboot prompt, after which things have gone smoothly.

I had to futz with the settings a little to make sleep-on-lid-close work again, which was a bit annoying, but the bigger problem is WMP 12, which downright refuses to work after I wake the laptop up by opening the lid. The application launches, but then it presents me with this: 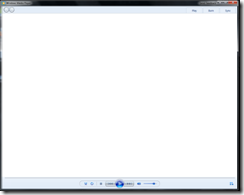 and a busy cursor. And there it remains. In fact, it refuses to die by any conventional means: the close button doesn’t work, the close command in the Jump List menu doesn’t work, taskkill doesn’t have any effect, and neither does ending the process via Task Manager. The only thing that does work is restarting the computer. At least once I’ve had even that fail to kill the WMP process, so the shutdown process shut down, and the OS kept on running. A hard reset and a disk check later, things work fine again – until the next time I close the lid.

I posted a summary about the problem on the Windows 7 Beta TechNet forum. Here’s hoping someone has a solution. 🙂

Overall, I like Windows 7. It does a good job at bringing the Windows GUI closer to modern standards. The window manager has even learned a couple of useful tricks. I can’t wait for the day when alternate Window Managers for Windows begin to appear.

So I’m in the clutches of the lurgy here, and trying to keep my brain active. I’ve received a miscellaneous bunch of books in the mail in the last few days, one of them being Microsoft Expression Blend Unleashed. I’ve read the first two chapters, and skimmed the next two.

“If you have used Microsoft Vista, you will have noticed how Microsoft appears to have finally gotten an outstanding balance with their product with respect to familiarity, visual appearance and general feel.”

OK, so we’re starting off with a Vista ad. Great. This bit, on page 10, was the moment when I began to question my judgment in choosing this book over the others on the market. No, wait, that happened on page 4:

“Next Generation Hardware Is Coming!

Already hardware changes are being made to accommodate Vista-specific features like Windows Sideshow.

However, it appears that the implementation has been slow to gather momentum in this particular case.”

The same chapter expresses similar feelings towards other Microsoft technologies, such as Silverlight. Fine, I get it, Silverlight is cool. However, I bought a book to learn how to work with the tools, not to be blasted with marketing garbage.

Chapter 2 really makes clear that this book is not intended for a programmer. Topics that are obvious or at least easy for a developer are discussed in a tone that, to me, feels condescending. Around page 48 things get more interesting – first demo app. At this point, the author’s conversational tone is beginning to feel forced. However, the next few pages do cover bits of the Blend tooling that are interesting to me. On the downside, that coverage is accompanied by a step-by-step tutorial no less than 44 steps long. Perhaps this could have been broken down to a number of sub-tasks, so that the steps could be kept simple, and grouped logically?

Chapter 3 meticulously goes through all the panels of the Blend UI. Maybe it’s just me, but again a little breathing room would have been nice.

I have few comments about the XAML basics bits in Chapter 4. It’s a very short chapter.

I’m really hoping the rest of the book offers something more compelling for me. More posts when I read further.

No pictures, or posts for that matter. I’m coming down with something, possibly a flu, possibly worse – I already have a sore throat, and my bronchi seems to be clogging up.

Brief updates: I’ve started my new gig with a day of general briefing about the customs of the customer, and another day of training specific to the customer’s platform. Movements are definitely constrained, code-wise, but the platform seems impressive.

I’m also re-doing week one of One Hundred Push-ups, now with considerably less muscle ache on the in-between days. Now, if I could only get my eating habits in check… 🙂