Software that doesn’t pull its weight

A moment ago, I decided I’d play around with ASP.NET MVC for a while, mostly just to try out the Spark view engine and see if it actually is as elegant as it looks. I fired up Visual Studio, and then remembered that I should probably install the new Release Candidate of ASP.NET MVC too.

I downloaded the installer, ran it, and got this: 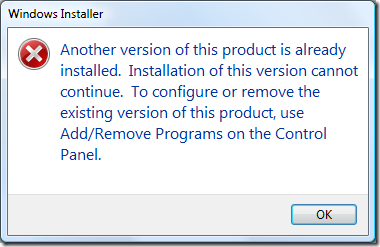 First of all, having an earlier version installed is an error? Are you saying I shouldn’t have tried the beta?

Second, just what exactly is preventing you from offering a button that says something to the effect of “replace with this version”, runs the uninstaller quietly and then installs? Why bother making a big deal out of this?

Third, if that’s too much work, could you at least please offer me a quick way to access the uninstaller? Instead, now I have to open up Explorer, groan in exasperation, dig up control panel, go to Add/Remove Programs and remove it myself, then close the error and re-run the installer.

And the feature isn’t even called Add/Remove Programs in the Vista default control panel view: 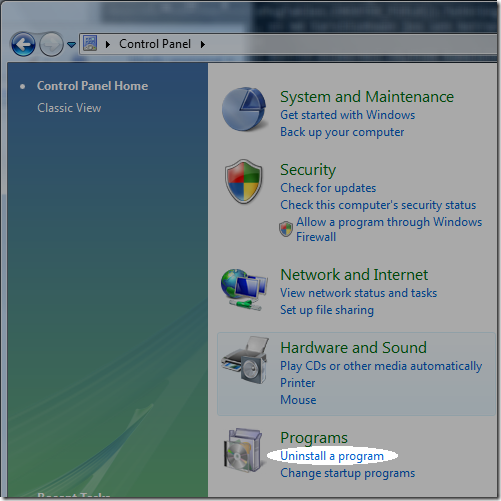 Of course, since this product is targeted at developers, the people encountering this error will probably have the good sense to locate “Uninstall a program”. But if this is a general installer feature, which I think it is, I can imagine a less computer literate user might not dare to disobey the message like that.

I’m sure it’s easier to fail and let the user deal with it. But damn it bugs me. I haven’t even begun to evaluate the actual product, and already it has given me a bad impression. Good thing I’m still inclined to like the framework itself.

Now that I think about the error a bit more, I’m pretty sure I’ve actually done the same deed – packaged an IE extension in an installer that would throw precisely the same error if it was already installed, which meant upgrading required an uninstall. Damn! Now I’m angry at myself too.