Ever since I bought my ThinkPad, I’ve been primarily using Vista. And although my initial judgment was “disappointed”, I’ve grown fond of the new interface, and rarely find things that really bug me. I even like the Media Player 11 interface, enough to prefer it for playing music and videos.

However, it doesn’t like to work with formats it doesn’t know, and the list of those formats is long. I’m particularly interested in FLAC and OGG, because most of the music I’ve manually ripped from CD is in those formats.

I tried to get things working previously, by installing a filter that was able to play the files, but that alone isn’t enough. If you like the WMP11 interface, you’re likely to want the files to show up there too. This is how it’s done:

First, get a codec pack that will play OGGs. The Combined Community Codec Pack seems to be a fairly popular alternative. Next, get a plugin that will provide metadata support: WMP Tag Support Extender. I had it figured this far, and still had no result. Until I found a Windows Media Player 11 Guide that had the key information piece: even without the tag support, when the proper codecs are installed, WMP recognizes the OGG and FLAC files as playable media. However, it does not know that they’re music files, so it indexes them as “other media” instead. And once the files have been indexed, they won’t be re-added when you scan the music folder with the tag support plugin enabled. The trick is, then, to delete the “other media” and re-add it, after which it gets properly recognized as music.

This “other media” view is almost hidden – it took me longer than usual to locate it. It lurks under the note icon in the top left corner: 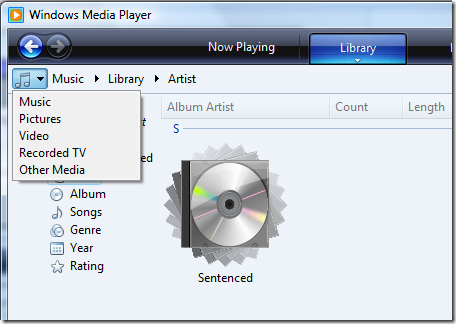 Although there is an alternative way to access it: select “other” in the Library menu.

Having removed the offending entries from the index, WMP now correctly figured out that my OGG files were in fact music. Success! Now I can again enjoy my collection of Sentenced and Kamelot.